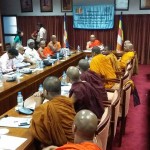 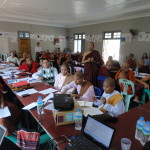 Successful workshop organized at the Asia Alinyaung Monastery in Pyin Oo Lwin, Mandalay Division on 20. – 21. February 2015. 60 monks and 15 lay Buddhists from all over Myanmar came together to address religious freedom issues and the place of religious minorities in Buddhist majority states. The workshop was organized by the Buddhist Federation of Norway (BFN) in cooperation with the Tampadipa Institute and the Asia Alinyaung Monastery. View Event 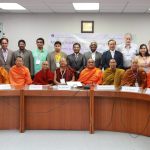 In partnership with the Mahidol University, Institute of Human Rights and Peace Studies, the
Buddhist Federation of Norway organized a two-day workshop on issues relating to Freedom of religion or belief. The event, which took place on 4 – 5 October 2014 at the Mahidol University, gathered about 30 monks and Buddhist scholars from Thailand, Myanmar, Bangladesh and Sri Lanka. The aim of the workshop was to explore Buddhist notions of religious tolerance and religious diversity, but also to point out some of the difficulties facing Buddhist majority societies today in relation to religious minority communities. In this context, the workshop aimed at articulating a Buddhist discourse on the values of Buddhism relating to religious pluralism and religious minority rights. View Event 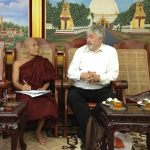 The President of the Buddhist Federation of Norway, Mr. Egil Lothe and researcher for the Buddhism and religious minorities project, Dr. Iselin Frydenlund went on an exploratory trip to Myanmar in June/July 2014. The aim of the trip was to learn from Buddhist monks and laypeople about interreligious relations in Myanmar, to understand their concerns, and to discuss peaceful ways ahead. Lothe and Frydenlund were received by high-respected monks such as U Panditabhivamsa of the Panditarama Shwe Taung Gon Sasana Yeiktha, Rector U Addiccavamsa of the State Pariyatti Sasana University, Yangon, and high-ranking monks at the Sitagu International Buddhist Academy in Yangon and Sagaing. Also, meetings were held at one of the most important nunneries in Yangon. With assistance from local partners, several meetings were organized.  View Event 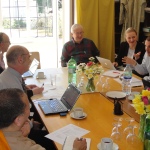