Towards Understanding of Religious Minority Rights 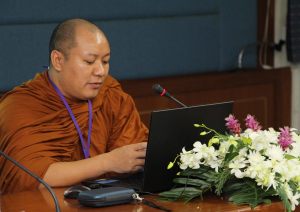 Towards Understanding of Religious Minority Rights

It is an honor for me to participate in this workshop. I would like to share with you the situation in Shan State, the Union of Myanmar, where I was born and bred.

First of all, I would like to express my thanks to Dr. Egil Lothe, President of the Buddhist Federation of Norway, for inviting me to speak in this workshop. This kind of workshop can bring about substantial impact on how we deal with inter-communities problem we are facing today. It might shed some light in the areas of the rights of religious minorities in any country. I also believe that it will strengthen the harmonious spirit and unity among the diverse religious ideology. Looking back the world history, we learn that religious conflict has been one of the major problems in the world, especially in Europe and Middle-East.

Just recently, most of us are aware that the religious violence has been going on in many parts of the world including the country where I belong. Religious conflict often breaks out on the ground of religious fundamentalism which denies the rights of the other believers. It is often found that religious conflict is also directly or sometimes indirectly linked to the geographical, economic, social and political situations. Practically, we have look at the present situation and find a solution to compromise based upon mutual respect and understanding.

Back to my motherland, the Shan State, situated in East and North-Eastern parts of the country and forms a quarter of Myanmar, history has shown us that native Shan State people have gone through some hard times. Shan state is heavily militarized with the presence of the largest number of Burmese government troops since 1952 when Kuomintang troops were driven out by the communists in China. Since then, no less than eight armed groups from the native Shan State people have taken up arms against the Burman dominated army and state.

However, as I speak to you now there is a genuine hope and some possibilities of a nationwide ceasefire are within our reach.

Shan State people are peace loving people and they have been very tolerant of each other with regard to religious differences. For many centuries, almost all native Shan State people follow Theravada Buddhism, whereas some Chinese immigrants follow Mahayana Buddhism. During the colonial period, there are also immigrants from sub Indian continent, many of whom were brought there by the British, and who brought with them Hinduism and Islam. The British, American and Italian missionaries came about a hundred years ago setting up schools and churches, converting people into their faiths.

However, we rarely heard about any clash between those beliefs. The immigrants co-exist peacefully with Shan State native people and even pick up local languages.  They live side by side and trade with local people. Sometimes they even become sympathizers to Shan State people and join the Shan resistance fighting for their self-determination, equal rights and genuine federal union. For example, the former head of SSA Col Sai Leik was a half Shan Muslim and his brother, Brigadier General Sai Loo, is still active in resistance service. Indeed, after the brief clash many Muslims from Lashio fled to the Shan State Army controlled areas. And, some MPs of S.N.D.P (Shan National Democratic Party), known as White Tiger Party, are Christian.

So, it is clear that Shan State Buddhist people are tolerant and friendly when it comes to belief. There has been no history of clash in Shan State on religious sentiment; and the rights of minority among the Shan majority have also been addressed. Whenever there is a religious riot erupted in Shan State, mainly in big cities such as Taunggyi and Lashio, Southern and Northern Capital of the Shan State, it is usually a consequence of the riot in Mandalay and Yangon. This means the riots in Shan State usually started in Mandalay and Yangon and are led by people who migrated from there. Otherwise, religious clashes are something that we could have done without in the in Shan State. When the riot happened very briefly in Lashio, following the one in Meikhtila, the head of the Lashio Sangha, the Ven. Punnyananda, invited the Muslim leaders to his monastery and offered them financial and social assistance. His work and some other similar work by Sitagu Sayadaw and Shwe Nya Wah Sayadaw have been reported in the Burmese language news; but sadly this kind of news does not seem to interest many observers from outside because none of them has picked it up.

The existing peaceful co-existence does not mean, however, there is no tension. For example, the polygamy system where a Muslim man can marry four wives is one of the sources of tension. In Europe and some Asian country like Singapore, the governments have introduced some legislation related to this practice to ensure harmony among communities of different faiths. Such thing does not exist in Myanmar. Besides, the law and order system in Myanmar does not usually stand on the side of the people. So, both religious minority and majority do not feel protected by the state and often take the law into their own hand.

In conclusion, I would like to say that while the religious intolerance should be stopped by all means on the one hand, religious understanding and tolerance should be positively promoted at the same time. People from outside such as Institute of Global Engagement and Columbia University from USA have jointly tried to address the issue with local people holding workshops in Myanmar. It is a positive move. Trust building and mutual understanding are the keys to achieve this goal. We have to send peace signal to each other that we are not a harmful neighbor. We need to show our respect to one another and strengthen friendship. We need to teach our children to respect other religions and the rights their believers.

May the world be free from religious exploitation and be blessed with compassion!