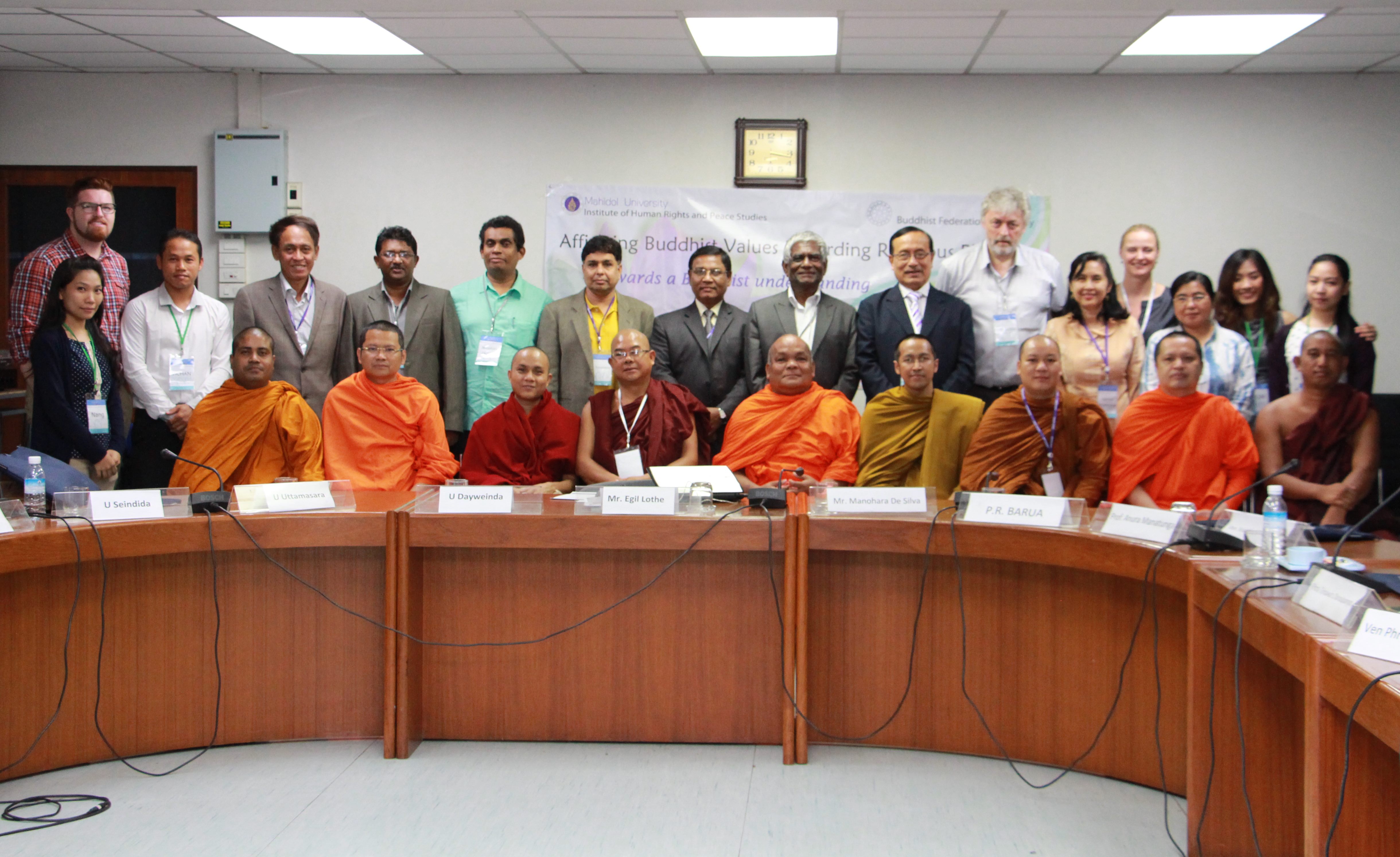 In partnership with the Mahidol University, Institute of Human Rights and Peace Studies, the
Buddhist Federation of Norway organized a two-day workshop on issues relating to Freedom of religion or belief. The event, which took place on 4 – 5 October 2014 at the Mahidol University, gathered about 30 monks and Buddhist scholars from Thailand, Myanmar, Bangladesh and Sri Lanka. The aim of the workshop was to explore Buddhist notions of religious tolerance and religious diversity, but also to point out some of the difficulties facing Buddhist majority societies today in relation to religious minority communities. In this context, the workshop aimed at articulating a Buddhist discourse on the values of Buddhism relating to religious pluralism and religious minority rights.

The leader of the Buddhist Federation of Norway, Mr. Egil Lothe, expressed in his opening speech the importance of having principled discussions from a Buddhist point of view on how majority-minority relations best can be handled. Human rights principles – including Freedom of religion or belief – constitute the best instrument available for just treatment of all religious communities and for reaching agreements across difference. Thus, Buddhists need to engage in discussions on how to create a platform for co-existence. This raises important questions about equality and dignity as universal values and what this implies in actual practice.

While the workshop did not reach any firm conclusions on how to translate Buddhist principles of tolerance into actual policies, certain important principles relevant for religious freedom were certainly confirmed during the workshop:

This was confirmed in the speech given by the Ven. Phra Phrommethee, the spokesperson of the Thai Buddhist Sangha Council. He emphasized that Buddhism does not force or coerce anyone, and that we all should behave in a proper manner towards others, in accordance with the eight-fold path. Ven. Phra Phrommethee referred to the famous Buddhist analogy of comparing the Dhamma to the sea, which points to the immense depth of the teachings, as well as to its complexity. Furthermore, the venerable stated, if we compare our communities to the sea, we can appreciate all rivers and streams running into the sea as different communities joining together in the sea. In that religious majorities and minorities can live together as one. Ven. Phra Phrommethee  ended by blessing the workshop and all its participants.

Professor Emiritus Dr. Premasiri Pahalawattage also emphasized Buddhist ethical principles for the promotion of interreligious harmony. Prof. Premasiri pointed out particularly two ideas in Buddhist scriptures relevant for the discussion: 1) Dogmatic clinging is characterized as a canker, as a latent evil tendency, and a harmful kind of grasping and 2) The Buddha’s teachings are for the purpose of living in the world without coming into conflict with others. Importantly, however, the Buddha did not pose the view that all views are equally true, but pointed out the need for equanimity and respect across difference.

On the canonical aspects of Buddhist positions on tolerance, Professor Suwanna Satha-Anand pointed out three aspects conducive to peace and tolerance. First, she pointed out the ethical dimension in which suffering is caused by lack of knowledge. This implies that evil is not something inherent. Consequently, there is no need to get rid of “evil sinners”. At the normative level, Buddhism can thus be accused of patronizing non-Buddhists, but not of repressing them. Second, the specific sense of temporality, in which time is endless, makes the present less relevant compared to monotheistic religions. Third, Professor Satha-Anand pointed out, Buddhist ontology emphasizes difference as a necessary condition of self/non-self. Thus, any being or any world cannot be understood in radical dichotomizations of in/out, and Buddhism takes caution against absolute truth claims.

Following from these insights regarding canonical resources for respect and tolerance, the workshop facilitated important discussions on Buddhist history and politics, Buddhism as ethnic minority or majority religion, and intra-religious conflicts. Associate Professor Dr. Gothom Arya affirmed the tolerance of Buddhism, but also pointed to some of the challenges in Thai society through history, for example through what he regarded as a too close association of Buddhism with Thai ethnic identity.

In the following discussion, it was pointed out that in times of perceived threat to the Thai state the state tends to set minority rights aside. Moreover, some discussants claimed that religious tolerance in Thailand can only prevail when Buddhism is state religion. If Buddhism’s position within the state is perceived as threatened, intolerance towards religious minority communities increases. It was widely agreed upon that the reliance upon commentaries and teachers as sources of truth in monastic education poses a challenge. Thus, there is a need for monastic educational reform so for monastic students to read the original texts for themselves.

Another issue raised concerned the relationship between Buddhism and the Universal Declaration of Human Rights. During the discussion the concern that human rights constitute a Western project, coinciding only with Christian interests, was raised. Also, skepticism was raised as to the one-sidedness of rights, ignoring the importance of duty towards all beings. A critical view on the notion of human rights was presented by the Sri Lankan lawyer Manohara de Silva, who questioned the very notion of minority rights, warning against minority rights being used as a tool of aggression, and moreover that minorities can also be the aggressor, not only the majority. Finally, according to de Silva, the notion of minority rights is problematic because a majority in one country (for example Sri Lanka) can be a minority in a regional/global setting, while a minority in Sri Lanka can constitute a majority in wider setting. A different concern was raised by the Bangladeshi representatives, emphasizing the need for protection of minorities. Being a small minority in a Muslim majority society, Prof. Barua urged Buddhists in majority societies to treat their minorities with compassion and tolerance, treating the religious ‘Other’ as our family. Majority Buddhists should show tolerance towards their minorities in order to preserve global peace.

In the following discussion it was pointed out that there is a mutual fear psychosis among various religious groups in the region, and that Buddhists fear that they will become a minority population in the near future. These fears might be real, so the question is how to apply the concept of tolerance in this situation. One issue of major concern to several of the participants were the issue of Christian missionary groups doing social service among the poor and destitute in Buddhist societies. However, participants emphasized different approaches in this question: some argued in favour of legislative measures, others for a better reflection on the part of international donors on the role of religion in humanitarian assistance, while others pointed to the need for Buddhist organizations to engage more actively in social work along the lines of Christian relief organizations.

In dealing with some of the issues brought up during the workshop, Dr. Khin Zaw Win emphasized the need for states to protect religious buildings, as well as the need to secure freedom of speech. He also pointed out the need for the monastic order to engage more in inter-religious dialogue, as well to the need for more comparative religion to be taught in schools. Dr. Win also argued that the Emperor Asoka could serve as a prime example for Buddhist pluralism, tolerance and togetherness in a global world.  In discussing the conflict in Southern Thailand, Ven. Phra Tinnawat emphasized the political rather than the religious nature of the conflict, and made a strong call for inter-religious dialogue and the need to put one self in the shoes of others. He also urged Buddhists to be self-reflective and ask what is it that makes up one being a Buddhist: identification with Buddhism or application of Buddhism?

Prof. Parichart Suwanbubbha in her introduction emphasized the need for deep-listening dialogue, which includes (among other things) to welcome all difference, to listen with loving-kindness and to importantly, to recognize that dialogue is a process. She also spoke of dialogue as a tool for non-violent tool of communication and that interreligious dialogue is well-rooted in the Buddhist textual tradition, as exemplified in the text Questions of Milinda.